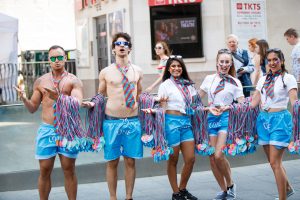 Ever wondered what makes PR stunts work. Get them right and your brand can see success by way of increased sales, get it wrong and this could have a negative effect on your brand.

Here are some of the Top 5 PR stunts of all time.

• One of the earliest marketing stunts came from Hollywood involving the Hollywood sign which is recognized around the world for its glamourous location.
• Back in 2004 Dove created its ‘Campaign for real beauty’ they opted not to use models for this campaign and was hugely successful and saw sales increase.
• In 2018 Fever PR designed a 25 foot statue of Jeff Goldblum to celebrate the 25th Anniversary of Jurassic Park. The statue was located in front of the Tower Bridge, London.
• Carlsberg for many years has been using the strapline ‘probably the best beer in the world’ but chose to launch its ‘probably not’ campaign.
• 2019 bought the arrival of the Greggs Vegan sausage roll which is now one of Greggs best-selling products. The launch of the product created awareness on social media and the news.

We have been involved with some PR stunts over the years……

Hiring Crowds for Valentine’s Day Events For many brands, Valentine’s day is an important day…