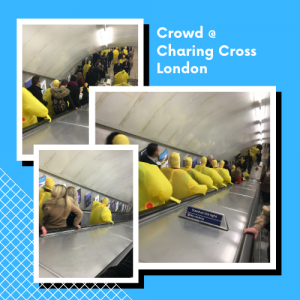 Rent a Crowd at a London Station

What was the client’s Brief?

They want people to know how crucial it is to have your cholesterol checked. We all need cholesterol in our blood, though when the levels become too high – this can cause problems in the future and the only way to find out is to have a test. A leading PR agency and Heart UK asked Rent-A-Crowd to assist with their publicity stunt, with the aim raise awareness and help save lives.

Renting the crowd to make a scene

A key part to the stunt was to make it fun and not that people were being lectured on having a test, though encouraging them to take it upon themselves to go get one. This meant it was imperative to book the correct staff for the stunt, who can engage people in conversation and really make them think about the topic at hand.

At Rent-A-Crowd this is one of our strengths, sourcing people that can help deliver the message the client wanted, and this is how we did it…

We opened our castings to find 100 hundred people from all demographic backgrounds, including age, gender, and ethnicity – this was requested by the client to represent the UK public, 60% of the staff had to wear business attire, to make it look like they were commuting to work, where the other 40% had to wear everyday casual clothing.

There were 20 people selected from the 100 to also wear a yellow costume, these people were playing the part of cholesterol. The cholesterol crowd members had to wander through the rest of the participants positioned in London‘s Charring Cross Station going up and down the escalators. The non-cholesterol staff had to act concerned, shouting “Where did this cholesterol come from?” when they came across a yellow costumed participant.

The campaign received national press interest and it started to trend on social media with images and videos being shared across multiple platforms. The client was over the moon with the reacting the public had taken to the stunt and to the funny yellow costumed participants.

London Rent A Crowd Of People

Ever thought of being an TV or Movie background extra?

Ever thought of being an TV or Movie background extra?  It’s a great way to…