The 10 Most Popular Guinness World Records 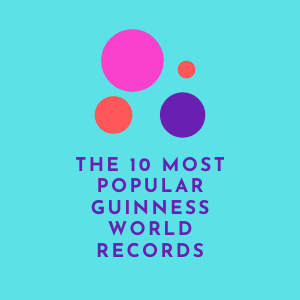 The Guinness World Records are wacky and extravagant! From the widest recorded mouth to the oldest person to ever live on Earth. Feast your eyes at our top 10 most popular world records in no particular order.

1. Widest Mouth (Unstretched)
Francisco Domingo Joaquim also known as “Chiquinho” Holds the record for the widest mouth which measures a whopping 17cm wide! His mouth was measured in Rome Italy in 2010 and to this day the record has still not been broken!

It took the human dominoes 11 minutes and 13 seconds to complete their fall of 2,019 people and donated the mattresses to charities after the record for a gesture of good will!

3. Largest Spider Ever Recorded
If you do not like creepy crawlies, it is time to skip record number 3 and go straight to number 4!

The worlds largest known spider is called “Goliath Bird-Eating Spider”. From the name itself you can imagine how big this spider is! In Venezuela, a member of the Pablo San Martin Expedition discovered the King of all spiders in 1965 with a leg span of 28 cm, big enough to cover a standard dinner plate.

4. Longest Fingernails on A Female
The longest fingernails belonged to Lee Redmond who was born in the USA. She started to grow them in 1979 and carefully grew them to reach a total length of 8.65 m or 28ft! The record happened in Madrid, Spain, on 23 February 2008.

5. The Tallest Man to Ever Live
Robert Pershing Wadlow who was Born in the USA is the tallest man ever recorded to live. He was last measured in 1940 and his height was 2.72 m (8ft 11.1in) tall!

At the age of nine, Robert was able to carry his who weighed 77 kg up the stairs of their family home.

6. The Most Dangerous Tree
Yes, you have read our 6th record correctly, you may wonder how trees are dangerous other than potentially breaking and falling on you… Wonder no more as the Manchineel tree is so poisonous and acidic that the slightest contact with human skin causes a breakout of blisters. Blindness can occur if you then touch your eyes! Even standing under it in the rain is enough to cause blistering if the skin is wetted by raindrops containing any sap.

Luckily if you live in the UK, you are safe as the most dangerous trees are in the Florida Everglades and the Caribbean coast.

7. Heaviest Train Pulled by Teeth
Velu Rathakrishnan who was born in Malaysia used his teeth to pull two KTM commuter trains, weighing a total of 260.8 tonnes! That is the equivalent to roughly 37 male African Elephants. He managed to pull the trains for 4.2 meters in 2003.

8. Fastest Motorized Toilet
The next record takes being late to work on another level!

9. The Largest Taekwondo Display
Martial Arts is all about respect. The largest Taekwondo display involves 8,212 participants and was achieved by The National Assembly Taekwondo Federation in South Korea, in April 2018.

The event was arranged to promote the peaceful message of taekwondo all over the world, as well as to pray for the peace and unification of South and North Korea.

10. The Oldest Person Ever Lived
Our final Guinness World Record rightfully goes to Jeanne Louise Calment who was born in France on 21 February 1875. Jeanne was the oldest human with the age of 122 years and 164 days!

Jeanne was no different to any of us, she ate chocolate, had the occasional drink of wine, and smoked for 96 years! She remained in fine health for much of her life and even took up fencing at the young age of 85.

Hire a crowd for a world record attempt of your own

Here at rent a crowd agency we provide large numbers of people for PR Stunts and world record attempts.  If you want to find out more, simply get in touch!

Bringing Hollywood Glamour to a Car Dealership Near You!

Bringing Hollywood Glamour to a Car Dealership Near You! It’s not every day that you…