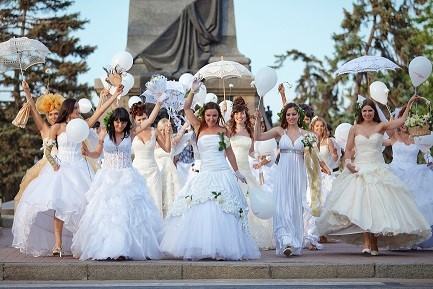 We provide staff for PR stunts, here are some of the Top Ten Publicity Stunts in History!!

1. It Was a Train Wreck
In the year 1890 businessman William Crush wanted an event that people would remember for years to come. So, in order to promote his company he staged a train crash between two trains he arranged himself. His trains collided in Crush, Texas (coincidence?). Admissions we’re free, but tragically safety plans weren’t well thought out, so a few fans paid with their lives.

2. The Macy’s Parade
The Macy’s parade that takes place around American holidays is a timeless tradition enjoyed by millions of Americans each year. Few people know, however, about its humble beginnings in 1924. The store organized their first event in order to attract attention to the new store. Little did they know it would become the staple of American culture it has evolved into today. Back then their meager spectacles paled in comparison to the massive floats and celebrity endorsement, consisting only of zoo animals and participating store employees.

3. Messages in a Bottle
In the year 1959 the Guinness brewing company dumped over about 150,000 sealed bottles with messages inside into the Atlantic Ocean. This was a gift to the world of sorts as a celebration of their bicentennial anniversary. They had hoped the messages would wash to shore and the stunt would gain attention. Indeed, many people still have their messages and keep them as collectors items today.

4. Give Peace a Chance
Singer/songwriter John Lennon and his newly wedded wife Yoko decided to devote their honeymoon to activism, in particular, for the cause of world peace. During this time, during which they invited friends and journalists to their hotel rooms on tour, they wrote the song, “Give Peace a Chance” which became a smashing hit. It saw so much success it essentially became the anthem of American Vietnam War protesters as well as a slogan of sorts for some supporters of the movement today.

5. The Taco Libery Bell
In 1996 Taco Bell garnered a great deal of publicity when they announced (in a newspaper ad they took out) that they had purchased the historic Philadelphia landmark The Liberty Bell. They further announced that they would be renaming the bell after the franchise. After thousands of complaints and a storm of controversy the franchise at last announced, “April Fools”

6. Barbie’s Pink Street
In 1997 in order to promote their Barbie product line toy manufacturer Mattel redecorated an entire neighborhood to sparkle completely pink! Through the media attention they estimate having reached over 100 million people.

7. Naughty Calender for A Nice Cause
In the year 1999, a group of women from the UK came together to make a calender. In it they posed nude usually using baked goods or other conventional items to cover up and leave some things to the imagination. They sold nearly a million copies, raising millions for leukemia research. Their story even inspired a major feature film.

8. The Blair Witch is Real
Many are familiar with the popular horror flick, the Blair Witch Project. What some don’t know is that in order to promote it per-release they distributed tapes to college campus, telling the students the tapes were based on real footage. They even presented clips as part of a documentary rather than a cinematic film. The campaign proved a success.

9. Iced Blaine
In the year 2000 magician and illusionist, David Blaine performed his “frozen time” stunt during which he remained frozen and trapped in a block of ice to the tune of 60 hours. While he survived the stunt paramedics feared he may go in shock and rushed him to the hospital out fear he could go into shock. David Blaine never tried such an insane stunt again.

10. When it Won’t Go Up
That same year the British Airways sponsored the addition of the “London Eye” ferris wheel. There were, however, some technical difficulties. With the eyes of the crowds gathered and the press closing tightly in, they struggled to erect the structure to its current glory. After a number of failed attempts to lift it from its place on the ground they sent an airship bearing the message “BA Can’t get it Up” leading to a roar of laughter among the crowd. Hear they turned a positive into a negative, while thinking quickly on their feet.

We have an incredible cast of talented people here at Rent a Crowd UK. For…

How to live the lifestyle of the famous…

London Rent A Crowd Of People