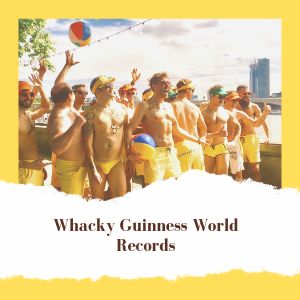 There were 5,000 Thai contestants who performed for a hula hoop competition which set a new world record for the biggest number of individuals doing the hula hoop dance all in one place.

World’s Biggest National Flag – Numerous workers helped each other to carry the national flag of Romania to set the record of the world’s biggest national flag near Bucharest. The flag was measured at 349.4 per 226.9 meters.

Biggest Gathering of Chefs – There were 2,340 chefs and sommeliers who met up to pose for a photograph in Mexico City to beat the record of Dubai which was set by 2,847 chefs in January 2013.

British Columbia’s Stirling Hart – Stirling Hart set a new world record as he competed and won for an open climb event with the pole measuring 90 feet.

Most Facial Masks Applied – In Taipei, 1,231 people broke the Guinness World Record by putting on facial masks that lasted for 10 minutes.

Longest Time In Contact With Snow – Jin Songhao even got to enjoy beer and some snack as he endured the cold of direct body contact with snow for a total of 46 minutes and seven seconds.

The 10 Most Popular Guinness World Records