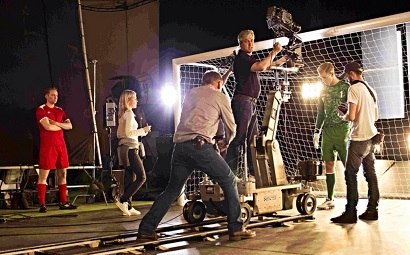 Breaking into acting is no easy task. Some people think it’s about being in the right place at the right time but while that can be true for some lucky souls it’s more about time and effort as well as managing not to set your hopes too high at first. It’s not just about the long haul, but also about taking the right steps. So where does one begin?

Setting the Stage
You want to start by setting the stage for your acting career. Read about and study courses on acting is a great first step to give yourself some much needed knowledge get ahead of the competition you’ll have. It also means taking classes and engaging in practice on a regular basis.

As you engage in this process you’ll also want to seek out other actors and other members of the film industry. Doing so will allow you to set up early connections in the business and open up the possibility for future crossovers and collaborations as well as providing you with recommendations that could go a long way in landing your next big role. It’s also about both what you know and who you know.

Watch actors work. When you watch movies, attend plays, observe how actors work. Look at how they portray emotions, deliver lines, and even down to how they follow the instructions of directors and others who they cooperate with during the making of the film. It’s similar to athletes who will closely watch the form, movements, and strategies of players and coaches on the field.

Audition often and audition well. Treat each audition as the ultimate opportunity and give it your best every time whether you’re auditioning for the star role as a background extra. Give it all you have every time. They key to being in the right place at the right time is always being somewhere at all times.

Do Not’s
Mailings:
Some actors will distribute headshots and resumes mailing them to all the powers that be patting themselves on the back for a job well done. Your time is better spending polishing up on your audition skills or perhaps preparing a monologue to show your real skills.

Pestering the Directors:
Or whoever it is making the decision. You will not be more likely to be chosen for the role because of frequent phone calls or constant emails and text messages. In fact the opposite is likely to be true if you continue your incessant pestering.

Lying:
About your skills, your experience, your history, nothing! Always tell the truth. When a lie comes out it won’t just affect one audition but your standing in the industry, and believe me, they communicate with one another! The last thing you want is to be blacklisted as a liar.

Talking too Much:
Sometimes it’s better to get straight to the part and start your role or audition. The directors will appreciate your dedication to getting straight to business and your ability to listen and follow instructions.

Follow this advice and you should be on your way to stardom in no time.

Hire a Crowd to Stay Competitive!

Case Study – Hire a Crowd to Stay Competitive! For every retailer and service provider,…

Official Statement from Rent a Crowd

Getting the Best from Black Friday 2018